As you can see by the title, we have FINALLY arrived in what could only be counted as a dream of mine, an impossibility among a plethora of impossibilities accomplished throughout its empire. I’M IN ROMA! And when in Rome, you might take a tour called “Rome By Night” led by your awesome tour guide, Stefania! (We had an awesome bus driver, too–Tonino, to whom we said every morning, “Bonjourno, Tonino!!”) I’m not going to even lie…I did tear up when we drove past the Colosseum at night. The sight of it was breathtaking. To think about what went on in that stadium and how many people died there. Alas, there was no Russell Crowe winning battles for us, and there was certainly not enough time to explore it.

Our tour guide’s name was Luca and we’re all pretty sure he referred to Christians as a cult. Uhh…yeah. We all sort of exchanged weird lances at one another after we heard that in our whispers….Anyway, a lot of parts of the Colosseum were donated for construction of other things waybackwhen. It’s a lot bigger in some ways than I imagined, but a lot smaller in other ways. I realize that’s hard to imagine, but just work with me here. 😉 It was beautiful and moss-ridden, just as an ancient ruin should be. I even remember how it smelled…not old, but full of Earth and rock. I did steal a rock for my 3rd graders back home who wanted to see one so so bad! That was fun. 🙂 I put it in a little baggy and it’s sitting next to me as I type. 😀

SO, I just told you what happened during the course of the next day, BUT, going back to Rome by Night, we did drive all through the big parts and squares of Rome. After learning and re-learning about the ruins and emperors of Rome, I teared up more than once…or five times! What would look to any ole person as just a stump or used-to-be altar, was significant in history and I took it all in because the next place I’m going to describe to you is the theater where Caesar was slain!!! We all stood with our upper halves leaning over the railings to see down into what used to be the main level of Rome. (If you don’t know anything of Rome at all, it’s built like a cake. Every time the Romans want to build something new, they end up excavating ruins! It’s quite awesome, really, to think that I actually walked around Domitian’s Stadium because it was RIGHT underneath my feet. :O :O :O ) And there we recited Mark Antony’s oration at Caesar’s funeral:

I come to bury Caesar, not to praise him.

The evil that men do lives after them;

The good is oft interred with their bones;

So let it be with Caesar. The noble Brutus

Hath told you Caesar was ambitious:

If it were so, it was a grievous fault,

And grievously hath Caesar answer’d it.

Here, under leave of Brutus and the rest–

For Brutus is an honourable man;

So are they all, all honourable men–

Come I to speak in Caesar’s funeral.

He was my friend, faithful and just to me:

But Brutus says he was ambitious;

And Brutus is an honourable man.

He hath brought many captives home to Rome

Whose ransoms did the general coffers fill:

Did this in Caesar seem ambitious?

When that the poor have cried, Caesar hath wept:

Ambition should be made of sterner stuff:

Yet Brutus says he was ambitious;

And Brutus is an honourable man.

You all did see that on the Lupercal

I thrice presented him a kingly crown,

Which he did thrice refuse: was this ambition?

Yet Brutus says he was ambitious;

And, sure, he is an honourable man.

I speak not to disprove what Brutus spoke,

But here I am to speak what I do know.

You all did love him once, not without cause:

What cause withholds you then, to mourn for him?

And men have lost their reason. Bear with me;

My heart is in the coffin there with Caesar,

And I must pause till it come back to me.”

Everywhere I went I had to touch everything. I touched the buildings and the streets and sometimes cars (hehe). Rome by night was one of my favorite experiences because we went when no people were going to be around and it was peaceful and beautiful and I just love HISTORY. Aw, man, I cannot wait to keep going!!! Tomorrow can only be a million times better!!

‘Til next time! XO’s 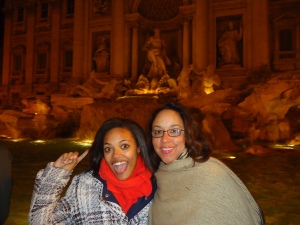 The Pantheon in Rome, Italy: Rome by Night